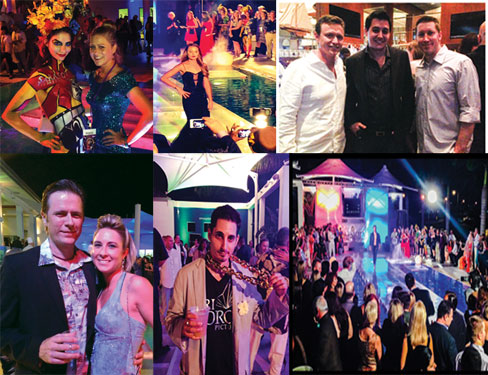 Of all the fashions I envisioned myself wearing for the 2014 Sarasota Film Festival’s Cinema Tropicale, body paint was not one. It was, however, the ultimate choice for several women that evening—women whose otherwise nude bodies performed risqué moves atop acrylic blocks stationed throughout the Sarasota Yacht Club swimming pool.

When attempts to find the perfect ensemble all over town failed, I realized that deep in my closet was a stunning turquoise sequin dress begging for fresh air. I added some four-inch stilettos, a sock bun and jewelry and was out the door.

Once inside, as I approached the will-call table, SFF volunteers Jerry and Kathy Chesley waved me over. The couple, who have been film festival volunteers for several years now, were greeting every guest in sight and adding a hot pink wristband to their wardrobes. Kathy gave me a quick hug and I made my way outside, where I was forced to choose between two parties—the “Caribbean” and the “Miami.”

I decided to relax for a few minutes—Caribbean-style—and investigate. I found a docile crowd swaying to the reggae beats of Democracy and filling up on Cuban sandwiches, pork quesadillas and fish tacos. But I could hear the pool party on the opposite side of the clubhouse getting out of control, and that was something I didn’t want to miss.

As I climbed the stairs and entered the gated pool, I looked up. If teleportation existed, I would have sworn I’ve just been teleported to a Miami nightclub. There were beautiful people everywhere, but what I noticed first was something I believe is quite rare for Sarasota—models wearing nothing but body paint. And not only that, but these women were dancing on top of acrylic blocks positioned throughout the pool, close enough to the pool deck that guests were lining up and, one by one, stepping onto the blocks to be photographed with these gorgeous models.

Of course, I, too, elected to pose for a photo. Thankfully, none of us fell in the pool in the process. I found out later that festival event manager Amy Donnellan and Heather Aguilera, owner of Heather’s Living Art in St. Augustine, had designed and painted the models, transforming every inch of their skin into vivid SFF billboards.

Rich Schineller was snapping away at guests strutting down a catwalk that spanned the length of the pool. He was wearing these phenomenal panda pants that only men like Rich Schineller can pull off. Next I spotted filmmaker Shaun Greenspan hamming it up near the dance floor. Shaun was wearing the largest, chunkiest and most obnoxious gold chain in existence, and I had to find out why.

As we chatted, a woman wearing a unicorn horn greeted us. Turns out this particular unicorn horn was promoting I Believe In Unicorns, an 80-minute feature film about teenage romance, directed by Leah Meyerhoff and starring Natalia Dyer and Peter Vack.

As my questions about Shaun’s gold chain flowed, he stopped me. “If you had come to my movie the other night, you’d know why I’m wearing this,” he said. I begged and whined, and the filmmaker, who recently founded Triforce Productions, spilled: “The movie is about two friends who argue over the existence of God while standing in line to see Santa Claus.” “But what about the gold chain?” I asked. “Gangster Santa,” he said.

Suddenly hundreds of cell phone cameras began to flash. Striking models from Molinari Models & Talent wearing looks designed by Ana Molinari and John Revisky had assumed position on the runway. We headed upstairs to get a better view and were escorted into VIP. I was trying to spot Richard Jenkins, who plays the father in the movie Stepbrothers, starring Will Ferrell and John C. Reilly, but instead, I ended up chatting up two guys I could swear were Red Lightning, the ball boy for the Florida State Seminoles football team, and Jase Robertson, an American television star on Duck Dynasty.

“You know who you guys look like, right?” I asked. “Supermodels?” Red Lightning answered. “I do like a good beard, but I wouldn’t go that far,” I said. “I don’t normally look like this,” Duck Dynasty said to me. Well, they weren’t celebrities or supermodels after all, but they were definitely entertaining.

From inside the VIP fence, I watched SFF president and CEO Mark Famiglio dart around the corner and disappear from view. I missed my chance to talk to him, but I texted Mark later and he told me the most talked-about party of the festival, Tropicale, was actually the prelude to the invitation-only Presidents Dinner the following evening, during which Sister Rosemary Nyirumbe, named one of the world’s 100 most influential people by Time Magazine, led everyone in a rousing, jumping Ugandan prayer.

But back to my turquoise sequin dress. I’ve had a chance to mull it over and maybe—just maybe—I’ll opt for body paint next year.

Categories: Nightlife
Tags: film festival out on the town sarasota